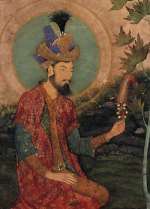 SAY YOU HAD THE CHANCE TO HOST A PARTY without limits. Say you were told that future generations would remember you by this feast. How would your party be?

Humayun knows just how his will be. This reclusive young king who prides himself on his ability to fantasize at length and in detail, has dreamed of a Mystic Feast since he was 14. Now, five years into his kingship he has already had the pleasure of hosting the feast more than twice. This year it is to be combined with his brother Hindal’s marriage – the annual Mystic Celebrations will be in the first half and the wedding feast in the second; of course they will flow into each other. As with all festivities, the Begums take charge of planning details such as seating arrangements, order of gifts, fabrics, colour schemes, aesthetics. For Humayun, this day is also his gift to his long-cultivated circle of artist friends; an occasion for them to take to the stage, find an audience and spread their magic.

Like any good thing, the Feast is still a work in progress, but it succeeds in astonishing anew with every edition. This time, preparations as well as celebrations, begin weeks in advance. Bazaars are lit up and homes are decorated. Humayun returns from out of town delighted to be treated to this tableau. His palace grounds are festooned with gilded tent poles, embroidered hangings, pavilions of European brocade and novel furniture.

If he should be judged by the best parties he gave, Humayun gets gold for imagination and indulgence. Image: From a 16th Century Mughal painting, Humayun’s Garden Party (British Museum)

The Mystic House or Khanah-i-talism, is the venue for the main course of entertainment. It is the most distinctive set of buildings within the Imperial Palace Complex. The main hall of the House is eight-sided and at its centre is a tank with a carpeted platform in the middle. A group of young artists amuse themselves in the empty tank.

As he walks into the room, Humayun is pleasantly surprised to see a jewelled throne. It was a gift from his aunt.  As soon as he settles into the divan that has been placed before the throne, he whispers his recipe for a bit of mischief to set off the amusements – “Fill the tank with water.”

Caught unawares, the artists at the centre of the tank and the prank, let out squeals of excited surprise. They are told they will be helped out as soon as they eat the anise-garnished medicated confection that will be offered to them on a tray. They emerge in high spirits.

The festivities have begun.  The food is laid out and gifts are distributed. The hall rings with the chatter of feasting guests and background notes emerging from the music room. The Royal Kitchen has arranged the widest possible range of cuisine and beverages imaginable. This year they are also accommodating special requests for cuisine that guests think up of on a whim.

Of this feast, a historian in the service of Humayun writes:

All kinds of dishes were produced
Filled with various types of exquisite foods;
On every table royal delicacies
From birds to fish were served …
With pure drinks of various colours.

This year, the nascent Mughal court witnesses the first formal deployment of glass goblets for guests. The goblets have been procured at the personal direction of Humayun. Visitors marvel at their beverages shining like liquid jewels.