SHAH JAHAN has his work day chalked out. No one could be better suited to high standards of discipline and his is a 12-hour work day. Easily the most precocious of his predecessors, Khurram (as he was known as a child) was a delight to his tutors and excelled not only in memorising texts but in mastering the martial arts.

Today he wakes up before daybreak and runs through his beads till sunrise when he walks over to the jharoka in the outer wall of the palace, to give darshan. This Indian custom, a ‘display’ of the leader before the people, was first introduced by Emperor Akbar into the Court timetable. More practically, for people to witness this proceeding reaffirms their faith in the establishment. From time to time, the Emperor pulls up petitions that have been attached to a rope hanging below, sometimes he looks out at the comings and goings in the workshops further out. Around 8, he withdraws into the diwan-e-am (hall of public audience).

Shah Jahan favoured jharokas in white marble styled with curved bangala roofs supported by balusters; pictured is his jharoka-i-darshan at the Naulakha in Lahore

In this hall, the Emperor takes his place in an alcove before proceedings begin with report submissions on matters of state. After a few hours here, he withdraws to the more relaxing environs of the diwan-e-khas (hall of private audience) where he receives ambassadors and lends a ear to key Court officials. This is the segment he particularly looks forward to because it is here that he gets to sit with architects and discuss plans for alterations to edifices and constructions of new buildings. Shah Jahan takes pride in his grasp of architectural grammar; he took his father by surprise when, at the age of sixteen, he oversaw the design of impressive quarters inside Kabul Fort.

After these discussions and another secret council, he retires to the perfumed zenana apartments for lunch and then a siesta before returning to the halls in the evenings to catch up on remaining work which often lasts till ten at night. On those afternoons and evenings that offers time for leisure, the Emperor and the ladies play cards and sometimes live pachisi (an Indian boardgame) on squares marked on the grounds outside. 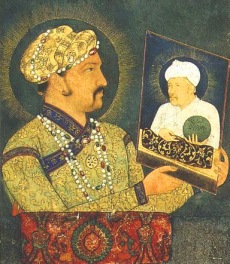 EMPEROR JAHANGIR’S IMPERIAL routine is hardly a cakewalk: getting up at sunrise, giving darshan at his jharoka (balcony), receiving requests or complaints, returning to catch up on rest, going back to review the parade before presiding at the diwan-e-aam and then to the confidential closed door meetings with the mansabdars, the high officials.

As public duties go, it is the diwan-e-aam that he enjoys the most. It is in this segment that ambassadors and merchants from other kingdoms vie for his attention with novel gifts. His advisers had informed him of the arrival of an English ambassador a while back. Jahangir however cannot say he is pleased with the quality of gifts offered so far by this delegate: items of velvet and leather that show every sign of the journey they have come through. The mastiffs however he greatly appreciates. In fact Jahangir feeds them himself with a pair of gold tongs.

Jahangir appreciates the paintings brought in by the Ambassador. This is praise coming from a recognised connoisseur. For even while he was still Prince, Jahangir had set up his own studios in Allahabad where he did away with the factory style of painting production preferred by his father, instead he had single artists take control of every aspect of a painting. As Emperor, he has whittled down the team of Akbar’s artists, retaining only the best in this new approach.

In light of the current techniques of European art, Jahangir encourages his artists to experiment with multi-point perspective, to develop standing portraits and also to introduce allegorical elements, after a fashion, while keeping with tradition.