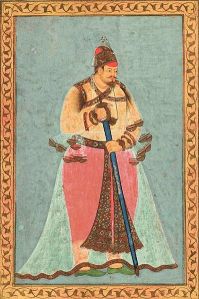 Ibrahim Adil Shah II receives Akbar’s envoy – a historic contact between the Indo-Timurids of the Mughal North and the Indo-Persians of the Deccan. Image: 17th Deccan miniature of the Sultan of Bijapur (Wikimedia Commons)

MUGHAL INTEREST IN THE DECCAN began to stir under the rule of Emperor Akbar. He had heard much of the greatness of the Vijayanagar Empire. Another thing that piqued his curiosity was the Persian-influenced Deccan Sultanates. It is during his reign that a historic contact would be made between the Indian Timurids and the Deccanis. It is no surprise then that even as early as the time of Babur’s ragtag advance into India, the Deccan was witnessing a mature field of action among multiple players from the region and over the seas. This included the Portugese takeover of Goa from the powerful Bijapur Sultanate of the Deccan.

Bijapur continued to be powerful in Akbar’s time and it is to this power centre that Akbar dispatched his grandee, Mirza Asad Baig. This was a capital city recognised as one of the great metropolises of the Indian region; arguably greater even than any Mughal capital. The report and goods that Mirza Asad brings back are enough to confirm this. He describes the airy environs around his appointed residence and a vast bazaar. In this scrupulously clean market, he notes there is a green tree for each shop. He mentions shops selling wine, jewels, armour, cloth and eatables. There are prize meats arranged upon shelves, there are double-distilled spirits, sweetmeats, pistachios, almonds and sugar candy.

Akbar’s envoy is received at the Gagan Mahal, ‘Sky Palace’, which served as Audience Hall and the Sultan’s private residence. (Image via industrialtour.com)

He describes one street in the bazaar dedicated to entertainment – dancing, drinking and pleasure seeking, and remarks at there being not one dispute to be seen. Fascinating as all this is, the jewels on display here come in for special mention. The Mirza does not forget to pick some out for the Emperor. These include a pokhraj (yellow sapphire), a neelam (blue sapphire), a diamond, and a fantastic model of a bird fashioned from jewels.

Mirza Asad Baig brings back these with him to the Mughal Court. There is one other thing from Bijapur that he shares with a private circle – tobacco and the huqqa – novelties in the Mughal domain, but ones that will catch on quickly.